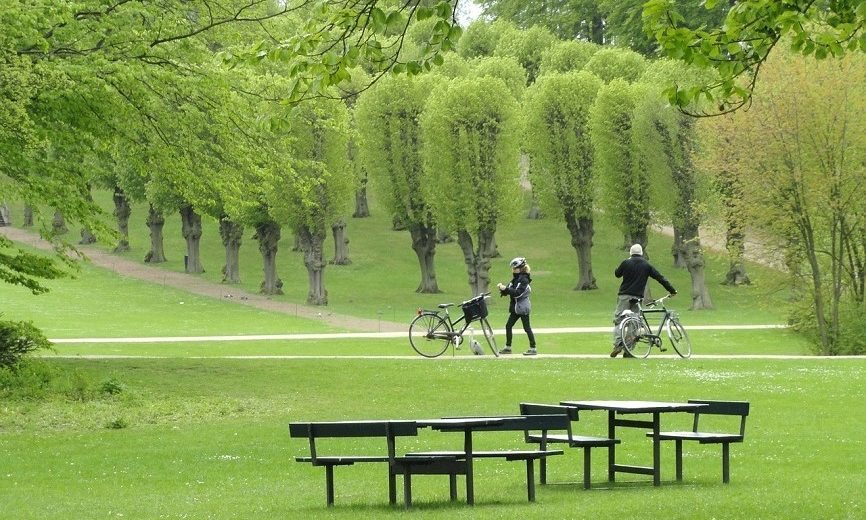 More than gorgeous sights to see, dreamy places to stay and cultural showstoppers, it’s a city’s environmental chops that truly make for a pulling power for the sustainable traveller. On a trip to Copenhagen, I was certaily using that prism. Keeping my eyes peeled for greenest initiatives and ideas, I was happy to nail these five as the best ways to remember the city by. A perfect way to get inducted into the ‘Copenhagen summer’ features beer, the Nyhavn waterfront and ample laziness. I was just about to dangle my legs off the edge of the canal, when Giuseppe, our guide, announced a different plan. Instead, six of us found ourselves at the GoBoat pavilion, gearing up to row our personal blue boat through the slim canals. Powered by solar energy, these boats move silently and slowly (not more than 5-6 km/hr) through the silvery canals and under the bridges.  The fleet is partially made of empty recycled plastic bottles and solar panels on the roof of the GoBoat pavilion provide power for up to 20 electric-powered boats. To top that, a picnic table sits right in the middle with a beer cooler at your feet. One needs no prior experience in steering the boat so for most of the ride, I took charge as captain – the wheel in one hand and a chilled beer in the other.

Aboard the GoBoat, one of the main highlights is seeing the iconic buildings that stand on the edge of the canals. One of these stayed with me longer than the others. It was a glass dome, a beacon to the city’s sustainable buildings in more ways than one. While its odd design made us stop for a look-see, it was the concept that kept us hanging there for a good hour. Dome of Visions is a mobile greenhouse studio that houses a variety of flora, including a 100-year-old olive tree. In addition, it is used to host artists, musicians, and other cultural events in Copenhagen and other cities. Apart from the stunning architecture, the dome has a mobile stove made with clay, horse dung and linseed oil bricks. Maybe something we could use in homes in the future? While organic flavours continue to dominate the restaurant menus (though in paltry helpings), Copenhagen is a city that truly embodies the organic way of life. Imagine packing in a punch in the scene – that too with a hot dog. Foodie or not, swing by DØP, the organic hot dog stand, located by The Round Tower on Købmagergade pedestrian street. Two reasons make this worth your while. One, a hotdog is as Danish as it gets (besides the smørrebrød that is) and two, everything served here is organic – the sauce, fried onions, turnips, the beef sausage, juices, the works. I almost considered turning non-veg. We weren’t the only ones enjoying the Danish summer. In front of our lenses were three young kids, jumping off high diving board into an enclosed pool by the canal. They jumped. We clicked. And they ran back to climb the board again. Trigger happy, we cheered them on. We were at the Harbour Bath in Islands Brygge, a harbour-front public path, outrageously popular amongst the locals. Copenhagen is one of the few cities in the world, where it is essential to have a green or blue space within a 15min walking distance. The Harbour baths are part of this initiative. This used to be an industrial junction, which is now focussed on becoming a socio-cultural centre for the city. Right from the material used (indigenous wood) to the intention of making this a sustainable recreation space, the baths are a great addition to an eco-friendly inclusion in the traveller’s itinerary. A ‘two-wheel takeover’ marked a special milestone in the history Denmark’s capital in 2016. A survey showed that cycles rolled in a whopping 10,000 more sets of wheels and outnumbered the cars on the road. Copenhagen has always encouraged folks to be on spokes instead of behind the wheel. I got a taste of it when I wobbled on the cobble-stoned streets on a cycling tour. Statistics, superlatives and data about cycling in the city came flying at me from the guides, locals and whoever met. What stayed with me was the smiling, (sometimes smug) faces of the cyclists who whizzed past motorists.

Copenhagen has earmarked 2025 as the year that it will be CO2 neutral. Another trip is definitely in order.