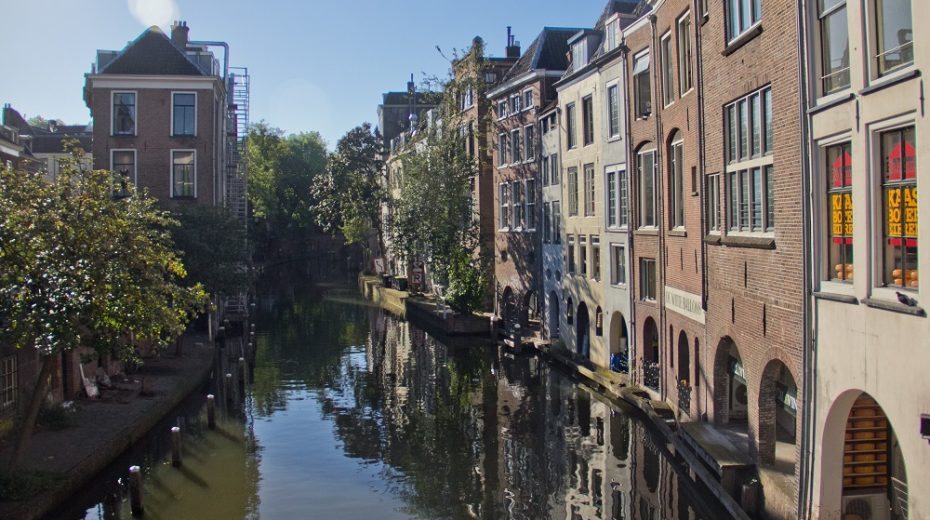 It was only 8 am and the shops that line the street to the Dom Tower were starting to stir into action. The city’s most prominent landmark is a beacon to tourists and regulars alike – I didn’t once have to ask for directions from the tube station. The Gothic bell tower peeped from behind a constellation of trees and buildings and I just walked in the general direction till I reached the slim lane that leads up to it. But I was in for surprise. When I stretched my hand with the exact Euros across the glass window, it was met with a contrite smile; there was a wedding planned in the church and entry wasn’t allowed for visitors. I cursed my obstinate habit of not ‘Googling’ before going to a place – they had already mentioned this on the website earlier – and retraced my steps to the cobble-stoned street, re-hashing my plan for the only day I had in Utrecht. I never miss a chance to haul myself up to vantage spots. For these towers is a veritable choice. And the 14th century Dom Tower, Netherland’s tallest church tower would have been ideal to get a sweeping view of the city, but Utretch had something else planned for me. I had just one more thing on the list for Utrecht – the Miffy Museum, a commemoration to Netherlands’ white mascot, a female rabbit that has starred in countless children’s books, TV series and is a legit souvenir from the country. But the stars had aligned to show me the door on the second pit stop too. “The Miffy Museum is for kids,” a woman sympathetically told me, noticing that there wasn’t any 2 feet and below human in my wake. I smiled and asked to see it anyway as I was wanted to know more about Miffy creator, Dick Bruna. I was rightly pointed to The Centraal Museum across the street, where there was an entire section dedicated to him. Armed with the audio guide, I strolled through the maze-like 19th century building with exhibitions ensconced in small rooms, tiered over a few storeys. There is history showcased in 17th century art, Roman coins, a 1000 years old boat in the basement, modern architecture and the famous section of Gerrit Rietveld chairs (you can even sit on one). Fixated on Dick Bruna, I kept my pace quick for the other galleries and finally reached the top-most floor where a sprawling room was dedicated to the fuzzy genius of Bruna. Soft morning honey coloured light filled the room and audio-visual exhibits hummed softly as I walked past them. The most fascinating was a replica of Bruna’s table where he would have sketched the adventures of Miffy – complete with a lamp and a high chair. I had earned my rite of passage having roamed the Bruna gallery and still wanted to peek into the Children’s Museum. This time, the lady at the door greeted me with a wave. What a delight to see museum goers of an average age of 3 ; naturally it was a brightly coloured place with the attendants never having to say ‘shush’. Teeming with families, the museum stood in stark contrast to the noiseless streets outside. I walked around the pint sized interactive exhibits for the next hour and then decided to spend some outdoor time in Utrecht.

Just like Amsterdam, a central canal bifurcated the town. I chose to trail the path along and see the lego-like, single storeyed houses plugged beautifully in the scene. Cyclists zipped past, dog-walkers kept a fast pace for dogs to trot behind them and a few boats glided in the canal with trigger happy tourists in them. Apart from the canal, Utrecht didn’t mirror the capital city at all. It was lunchtime by now and I decided to take a break at a street side café, with cycling as its major theme. The waitress at Blackbird Coffee & Vintage tossed up a perfect cup of cappuccino and biscuits to go with it. Vintage bikes on walls made a perfect backdrop to the café, considering it is one of the most coveted addresses for bagging one. Animated discussions on a purchase of a bike was the constant backdrop while I chose the outdoor bench to sip my coffee and watched Utretch in action. Ofcourse, this only meant a few cyclists, a handful of tourists making their way to Dom Tower and the daily thrum of one of the most easy-going places in Netherlands.