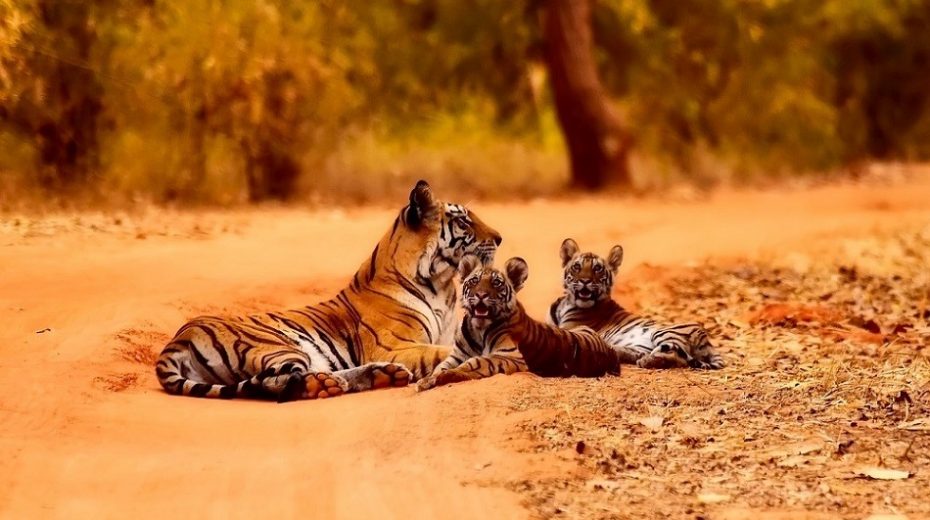 The wildlife tourism stakeholders of India have much to thank the tide of travellers that come each year, in hope to set eyes on the Bengal tigers of the country. While forest reserves face pressures from deforestation, poaching and overgrazing, the travel footfall does more good than harm, in keeping conservation in full steam and making it lucrative for the forests and surrounding infrastructure to offer their best. While no one can peg their bets on when and where one will spot a tiger, but some forests are more conducive to others. Here are five of the celebrated tiger populated jungles of India.

At the heart of India, lies the most famed Bandhavgarh National Park and four other forest reserves that make a remarkable forested belt for wildlife spotting. While each of these reserves has their own star animals to talk about, the lure of the tiger is what keeps the tourism wheels churning. It is the dense forests that brought author Rudyard Kipling to the region, which later became the backdrop of his book, The Jungle Book. The state has also worked tirelessly to keep poaching in check and use the tigers as the one of the highlights of the region. Amidst the fantastic flora and fauna of Bandhavgarh, walk almost 50 tigers, making it relatively easy to spot them during the summer months. Bheema, Bamera, Chandini, Kankati, Rajbhera, Dotty Krishna, Sukhipatia, Marchaini are few of the names that are bound to feature in the stories of the guides.

Getting There: The nearest airports for Bandhavgarh National Park are Jabalpur (200 km/4 hours) & Khajuraho (250 km/5 hours). From here, your accommodation can help organize a pick up. The closest railhead is Umaria (35km/30mins), but connectivity is a challenge from all parts of the country.

Once a game reserve for Rajasthan’s courtful of royals, the scrub and grassland forest of Ranthambore is now one of the most treaded places for wildlife thrill-seekers. The legacy of the erstwhile royal hunting ground took a U-turn in the early 20th century, when the tiger population fell at an alarming rate. Conservationists sped into action, altering the fate of this forest. Now, amidst the ruins of ancient royal buildings (especially a 10th century fort) and the scrub forest, the chances of spotting the tiger are many more folds. Last calculated in 2016, the number of tiger population hit a 50 plus. It’s best to explore the rocky ridges and the mixed forest over 2-3 safaris to better your chances. Machhli, Sultan, Krishna, Mala and Ustad are some of the tigers who have left an imprint on the jungle with their size, great family lineage or sheer dominance of a region.

Getting There: Sawai Madhopur is the base town to access the forest. It is well connected by train from Delhi and Mumbai. Ranthambore lies 375km from Delhi; many choose to drive here. With an impressive population of around 200 tigers, the Uttarakhand located Jim Corbett National Park is a prime hot spot for spotting the Bengal Tiger. The only impediment is the thick forest that covers the undulating hills of the reserve. The entire national park is close to1300 sq km and is carpeted in saal, grasslands and mixed forest patches. Most safaris are able to touch only one or the other sections of the reserve. Even though there is a comparatively large population of tigers here, the chase to spot them is extremely intense. 4 wheel safari jeeps are networked together by use of phones, where naturalists and guides alert each other if they happen to get any cues of a sighting.

Getting There: Jim Corbett lies only 217km from Delhi, so most travellers tend to drive there. The closest railhead is Ramnagar, which is well connected.

The charm of Tadoba lies in its more tigers per sq km; 86 in 625 to be precise. The tropical dry deciduous forest is replete with woodlands, in the folds of which the striped Bengal tigers can stay camoflauged. Some, of course are unconcerned about the camera-wielding tourists and walk merrily by the muddy dirt paths, offering ample photo opportunities. The tigress, Maya and her cubs caused much flutter in the wildlife quarters of India when she abandoned her one year olds in 2016, almost a year prematurely than tigresses usually do. The hilly forested region awards more than just tiger sightings with its robust population of other animals, birds and reptiles.

Though famed for the one-horned rhinos, Kaziranga National Park in Assam has the tall pale yellow grasslands and dense thickets to make a perfect home for tigers. The park is a World Heritage Site and got its ‘tiger reserve’ tag in 2006.The sprawling stretch of the forests allow for stunning jungle views –early morning safaris on elephant backs in misty grasslands, silhouetted trees in the fading light of the sun in the evenings and ample vantage lookouts within the forest to take in the intense green and their inhabitants.

Getting There: Jorhat (90 km) is the closest airport and the most active railhead for connectivity from major cities of India. Best Season: Even though National Parks are closed only for the monsoons, (open from October to July), the best time to visit are the hottest months, April and May. The vegetation is sparse during this time and the visibility uncluttered.

Limited Entry: Some of the parks have limited entries per day so it’s best to book the safaris ahead with your resorts, so they can in turn plug your booking with the forest officials.