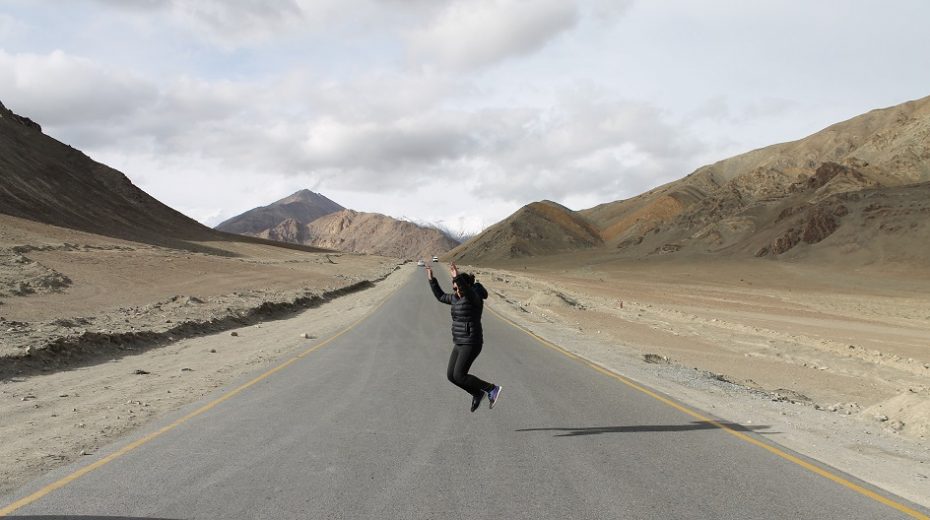 “I will go to Ladakh twice. The first time I will do that epic road trip from Srinagar to Leh and on my 2nd visit, I will fly in to Leh and explore every inch of the place,” sitting in a cafe I told my friend many years back. Today, barely a month after my return from Ladakh, I cannot help but smile to myself. Scored the first off my list and I cannot wait for the second to unfold. Already!

If you enjoy road trips, don’t think twice about this incredible journey from Srinagar to Leh on NH1D. The varied landscape, as you drive by the rugged Himalayan peaks, verdant valleys and high passes, along the winding 421km route till Leh is absolutely breathtaking. Here’s what I did on one of the world’s most fascinating drives!

Usually people break their journey for an overnight stay in Kargil, but we chose Ule, 70km before Leh, as we wanted to go rafting on the Zanskar River. It’s important to stop at these places, not just to gradually acclimatize yourself to the altitude but also to enjoy the sheer beauty of the Himalayas.

Srinagar: A shikara ride on the Dal Lake, a walk in the chinar-lined Mughal Gardens, gorging on Kashmiri delicacies – no matter how clichéd it sounds, you just have to do all of it. We got one day to explore all this and then embark on the road journey. Enjoying our lovely shikara ride on the Dal lake. An absolute must!

It is a long trip, so it’s best to leave really early in the morning. The plan was to leave at 5am but we managed to hit the road at 6.

Sonamarg: Our first break was at Sonamarg – it’s gorgeous rolling green meadows, snow-capped peaks and fir and pine tree forests at the backdrop were stunning to say the least. Along with the gushing Sindh River flowing by, the lofty green Himalayan range kept us company all through our drive. Stop here for a quick tea break, but don’t make it too long because there is a lot more to cover. A little company on the road:)

Zojila Pass: Just 25km ahead is the gorgeous Zojila Pass, at the height of 11,649 feet. It was our first encounter with snow and we squealed like children, running in the snow and throwing it at each other. The roads tend to be narrow and slushy because of the melting snow, so the drive here has to be slow and cautious. This was once part of the ancient Silk Route that connected to Central Asia. Drass: Moving 38km ahead, by lunchtime we reached Drass, also known as ‘Gateway to Ladakh.’ A board saying ‘the second coldest inhabited place’ puzzled me because Drass is at a height of only 10,990 feet and there are so many other places I could think of that are higher in altitude. And then I was told that the temperature here dips to a freezing minus 45 degrees centigrade..brrr!  After a quick lunch of Maggi noodles and tea, we headed for our next stop. Kargil War Memorial: The landscape has already changed from lofty green mountains of chinar and fir trees to tall, barren and brown peaks that have another-worldly beauty of their own. Kargil War Memorial is an eye-opener for civilians. It is tough to imagine how the war must have taken place with soldiers literally clambering up those inhospitable slopes to recapture the peaks. You find new respect for the Indian Army.

Ule: We finally reach Ule around 7pm and have a quick dinner and crash. Its really cold, and we are told that it’ll only get colder from here.

Rafting from Phey to Nimu: Our main agenda for the day was rafting on the Zanskar River, which has Grade III rapids. This is the only place in India where you need to wear body suits for rafting as the water is icy cold, as it’s literally fed by the melting snow of the glaciers. All geared up to hit the icy chill waters

The first rapid came in just five minutes of starting and we shrieked as we encountered the freezing water. Some brave enthusiasts amongst us even jumped into the icy river! We ended our trip at Nimu, the point where the Indus and Zanskar rivers meet. Magnetic Hill: On the way to Leh we stopped at the Magnetic Hill. The hill is supposed to defy gravity and pull vehicles towards it, but fortunately nothing of the sort happened, so we took our photos and headed for our next stop – Gurudwara Pathar Sahib, the highest Gurudwara in Ladakh. Soulful holy chants echoing in the mountain air makes this an incredible setting.

We reached Leh by 5 in the evening.  And this epic journey through the Himalayas had ended leaving me wanting more of the awe-inspiring landscape. A jaded city-dweller like me will never get enough of it..