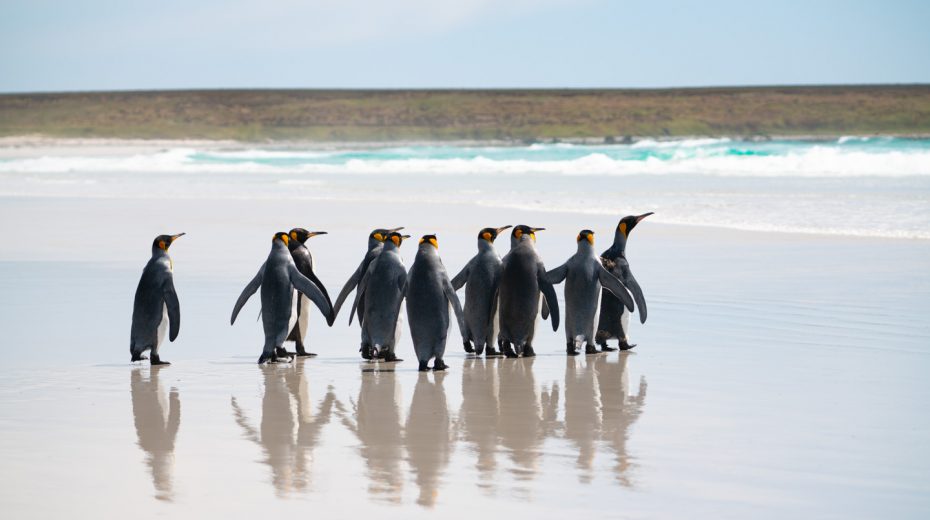 It’s just different down here. It doesn’t really hit you until you’ve been in The Falklands for a few days – or maybe even a week. This is a special place, one of a few dwindling places of its kind left in the modern world. There is so much freedom for visitors to the Falklands, it’s almost a little overwhelming. Most places you visit in the world there is a list of things to see in a list of “a”, “b”, and “c” found along trail “x”. In the Falklands, it’s not like that. Here, the only paths to follow have been carved out by sheep or penguins with the occasional rover track mixed in. A trip to the Falklands is very much a choose your own adventure, and that’s what I grew to love about my time here. To be honest on my first few days on the islands I was a bit taken aback with the freedom. It’s such a rare thing in the world today, that you almost don’t know what to do with it. Walking through farm fields, hopping over fences, and off-roading in Land Rovers – these are all just normal things in the Falklands.

At the beginning of my two week trip to the islands, I was having a hard time to put into words how I was feeling about the experience. It wasn’t until almost halfway through when, unknowingly a fellow traveler I met summed it up simply, insightfully, and very matter of factly.

I think the quote that will stick with me came from a returning visitor to the Falklands, who I luckily sat next to for meals during my time at Sea Lion Island. He was a fellow photography enthusiast, so conversation came easy, even though we’d just met. The discussion started the way most do while on the islands, talking about the amazing wildlife spotted on the day’s adventures. Soon the topics drifted to related travels, and we found we had been to a number of the same places, one of those being the Galapagos. Being one of the closest geographical wildlife hotspots, the conversation stuck on the Galapagos Islands for a little while. We both shared our stories, but then after a profound pause, he said to me, “You know what? The Falkland Islands are like the Galapagos, but without the handholding.” He went on to explain that was the main reason why he’s been back to the Falklands multiple times, but the Galapagos only once.

In the Falkland Islands, there are no time restrictions, no limitations, no real schedule besides dinner time – and even that is negotiable. It’s a photographer & wildlife enthusiast’s dream. You can spend as much time with whichever species you’re interested, without the tour guide lurking over your shoulder, pulling you away from something amazing just because the schedule says so.

This isn’t to take anything away from the Galapagos, they are amazing in their own right. However, as a photographer, I found my time in what it touted as the greatest wildlife destinations in the world somewhat bittersweet. Sure, there was some literally one of a kind stuff there. Maybe only photographers feel this way – but every time I was starting to get some good shots it was always time to go. Secondly, we were never anywhere at the right time for the light. Most tours seemed to be centered around mid-day which is fine for some – but the animals are generally less active and the light for taking photos is far from ideal.

One of my favorite days in the Falklands was on Sea Lion Island, the same day I met my new friend. The whole day was amazing – but especially the last hour of light. After the dinner in the lodge, the soft light of the early evening motivated me to pull on my big hiking boots for another walk to finish an already busy day. Just 10 minutes through grassy fields away from the lodge was a beach completely full of Elephant Seals and their pups. I was all alone, no guides, no rules other than respecting the wildlife and environment. I actually spent a lot more time out that evening than I planned. While I was watching a group of cute seal pups splash around in the shallows a massive brawl between adult elephant seals had broken out. Two pairs seemed to be in a heated dispute that blocked my passage off the beach. So, I stayed and watched as the sun turned the skies pastel shades of pink as it sank into the horizon. Tensions seemed to fade while the day faded into twilight. I managed to squeeze past the seals while avoiding the Magellanic penguin burrows that filled the hills like a minefield. On my path off of the beach, I found a group of gentoos heading home after a day at sea. I followed them at a distance to the outskirts of their rookery as the sky was still on fire despite being deep into the blue hour. I managed to get a few silhouetted shots – along with a lot of squawking in the final moments of the day. I remember walking back into the lodge and taking off my boots and just thinking to myself, ‘where else in the world can you do this?’. The answer is very few places. After visiting more than 80 countries around the world, I can tell you – there aren’t many places like the Falklands. The ability to explore completely on your own paired with unique wildlife encounters, is pretty rare. Above all else, the freedom – the freedom here is hard to top.

Looking back on my trip I often associate times that I was with wildlife pretty much all alone as some of my favorite times. However, another aspect of a trip to the Falklands that I wasn’t expecting to enjoy as much as I did was the people. While there are only about 3,300 people on the islands, everyone I encountered was interesting and had such a unique way of life. Falkland Islanders I found warm and inviting, but they are certainly not the type to hold your hand as you go off on an adventure. Another reason I love this quote I could easily see a Falkland Islander saying the same exact thing. Life in the Falklands is very DIY, and visiting should be no different.

I think people see images of cute penguins and for most that’s reason enough to visit the Falklands. For me, the people and the way of life here in the South Atlantic are a good reason to return. After spending two weeks in such a welcoming and small knit community it was kinda weird to leave.

The longer I stayed in the Falkland Islands the more the outside world seemed to fade. Outside problems seemed less important. The deeper I got, the more I didn’t want to leave and I knew I would return.