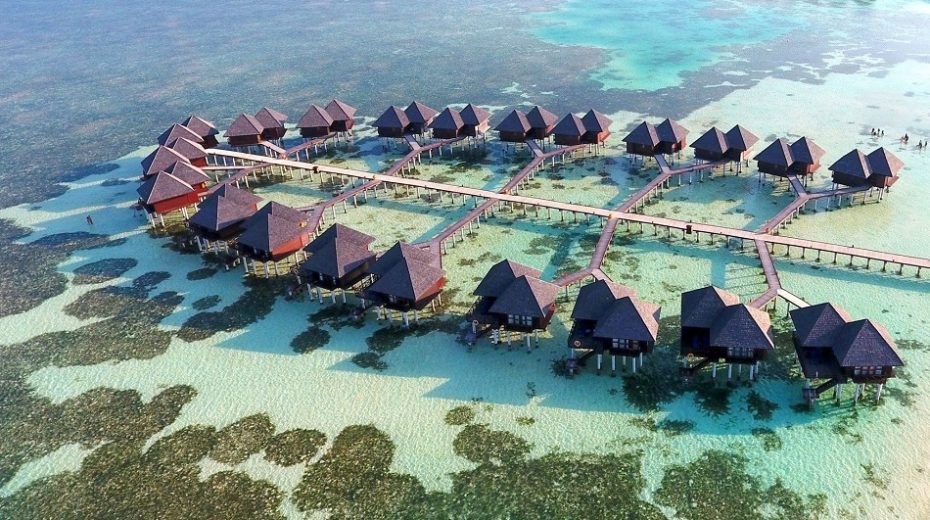 You see brochures crammed with powdery white beaches, images of wine-glass-clinking couples zip on TV advertisements and Instagram accounts are a canvas of marvelous blues and emeralds. But one wonders if it’s all that idyllic. The answer is a resounding ‘YES’!

It was the second morning in Maldives and there was nothing on our mind other than dangling our legs from the breakfast deck, heads ducked low and gaze fixed on the crystal-clear water, even though it was mirage-like with the wind. It was going to be a long breakfast at the Four Spices restaurant of the Olhuveli Resort, an island hotel (as are all of them), which could well be a sprawling open aquarium by itself. On the first day itself we had spotted Lion fish, baby Sharks, Sting Rays, Swordfish, Orange Striped Trigger fish, Angel fish of two kinds and many more that I couldn’t even keep track of, merely by peeping below the wooden decks. But my sister and I were waiting patiently for the lone Octopus that had a home in a clutch of corals at the base of the stilted restaurant. After an hour of waiting, with a coffee cup in hand, the sun hoisted up in the clear sky and the water got warmer. There was no chance of the elusive resident revealing itself at this hour. Dejected, we sauntered off to the cottage to get ready for the beach. We had arrived a day earlier at the Velana International Airport at Male, leaving the Delhi chill back. Ditching sweatshirts and jeans, we immediately got into shorts and enjoyed the bumpy speedboat ride to the island of Olhuveli, 45 minutes from the air node. The first scenes of Maldives corroborated all the images that were imprinted in our minds. Our jaws dropped at the sight of the milky blue water turning inky deep, as the sea got darker. The jaws hung low for the rest of the days and we picked them up only when we were returning. Deserted beaches swathed in pale sand stood as reverse oasis in the vast ocean. Many of them had rows of stilted cottages around them, and diving decks dotted with divers and snorkelers. The resorts started appearing shortly after we left the airport jetty. The boat driver announced that there were about 1200 islands in Maldives, of which 400 were occupied; 200 by resorts and the rest by locals.

From the time that we stepped on the resort island, there was complete memory lapse of time back in the northern plains. The relaxing Indian Ocean breeze enveloped us and island life swiftly took over. Honeymoon couples, families from all over the world and an equally multi-cultural staff dotted the place – but only the landing area and restaurants. As we discovered the island over the next few days, there were ample places to cocoon ourselves in isolated spots and live an escapist fantasy. The pool by the beach was our favorite haunt for the next few days. Books and beer were devoured with gusto, with the ravishing shallow lagoon and a snooze in the sun featuring high in the hours.  The only things that shook us from the holiday coma were a snorkeling trip, a Balinese massage, a few hours of diving to the base of the sea and an evening of dolphin watching.

Given that neither of us knew how to swim, the underwater adventures were stellar. Both snorkeling and diving were assisted activities where leaving ourselves in the hands of the instructors turned out to be an excellent idea, as we could focus on the marine wonders. A turtle almost brushed against my arm during the dive and smaller fish rained with thunderous speed as I sliced through their battalion. On another day, I held the hand of the snorkeling instructor and floated along to the middle of the sea in search of the bigger sharks and turtles – and was not disappointed. An unexpected bonus of a very large Stingray gave me the rite of passage to having the ‘ultimate’ Maldivian holiday. With my sister more nervous in water than me, the dolphin cruise turned out to be more relaxed as we drank wine and bit into fruit-on-stick, while more than 20 playful dolphins raced the speedboat as the crew clapped to encourage them. It took some time for the ‘oohs’ and ‘aahs’ to abate as the group settled down after watching a wonderful natural show of jumping dolphins. Back at the resort, we made daily trips to our breakfast spot in hope that the reticent Octopus would appear from below its coral home. We even clapped in hope that it might be a closet performer. It was on the last morning, when our heads and smiles were drooping at the thought that it may not appear, when he emerged – a definitive showstopper. Bulging eyes on either side of the head, tentacles gripping the rocks as it moved from one coral to another and changed colours in nervous anticipation of an attack by a passing school of fish. The Octopus itch was finally over and our marine adventure seemed complete.