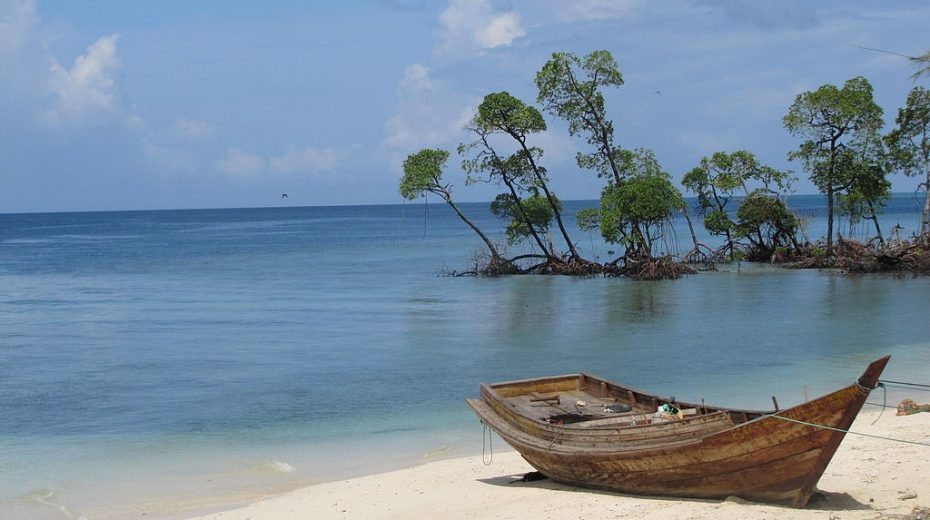 Gently lapping waves along stretches of pristine white beaches, a sea that changes colours several times a day, it would be hard to believe that you are in India. But a visit to the Andaman Islands situated at the norther entrance to the Malacca strait, completely transforms people’s ideas about beaches in India.

I landed in Port Blair but ended up going to several islands that make up this lovely archipelago. So, if you’re in the mood for island hopping, you could follow my itinerary. Powder white beaches, blue and green water, flaming sunsets, snorkelling, scuba diving and delicious seafood make this without doubt the top choice. This island reminded me of South Goa with narrow roads and green fields on either side, dotted with tiny shacks and houses.

Radhanagar beach, also called Beach Number 7, is absolutely pristine with white sand and mangroves on the other side. No wonder Time Magazine rated this beach as one of the most stunning beaches in Asia! I loved the absence of habitation next to the beach and was mesmerised by the sunsets here. That picture of the flaming orange sun that repaints the entire landscape, as it sinks into the sea will be forever etched in my mind.

Take a 40-minute boat ride from Havelock to Elephant, another popular beach that’s known for its stark beauty and water sports. Opt for a glass bottom boat to view the corals with myriads of colourful fish under the crystal-clear waters. It’s a magical experience. For me it will always remain special because this was the first time that I tried snorkelling. Although, my attempts were only a moderate success, but glimpses of the stunning underwater world, made the effort truly worthwhile.

After spending a couple of days in Havelock, I headed to Ross Island via the capital Port Blair. It’s about 20 minutes away and is perfect for a leisurely day trip. This former administrative headquarters of the British administration, once boasted of lovely architecture in splendid colonial clubs, bungalows and a church but unfortunately much of it lies in ruins today because of a massive earthquake in 1941.

The five beaches on this lovely island are not just gorgeous; they have a calm, relaxed pace that is best experienced as you explore them on a bicycle. Now again I have regrets – I was not that good at riding a bike, so I made myself a  promise to return after learning how to cycle. Even if you can’t cycle, the beaches are within easy reach of each other and I managed to move from one beach to another with ease. This is a popular spot for scuba diving with plenty of colourful corals. Beach No 2 has a lovely natural bridge formation made up of rocks that stands in stark contrast to the blue sea. The drive to this island, located about 100km from Port Blair, is one of the highlights of any visit to the Andamans. It goes through a reserve forest area, part of which is home to the ancient Jarawa tribe, one of the last few remaining tribes in the Andamans region. Their numbers have plummeted, and they had virtually no contact with the outside world, but the Great Andaman Trunk Road that passes through that area is making them venture out. I was surprised to see some of them during my drive –although tourists are banned from halting and speaking to them or offering them food.

There are some interesting limestone caves in the vicinity, that visitors can explore. It is the boat ride through the dense mangrove forest that excited me more although the caves themselves were a little underwhelming.

As I packed my bags to return home I couldn’t stop thinking of the emerald green waters and the stunningly colourful world in it. I just had a glimpse of this magical world and I made a promise to myself – I will return and this time with improved snorkeling and cycling skills!