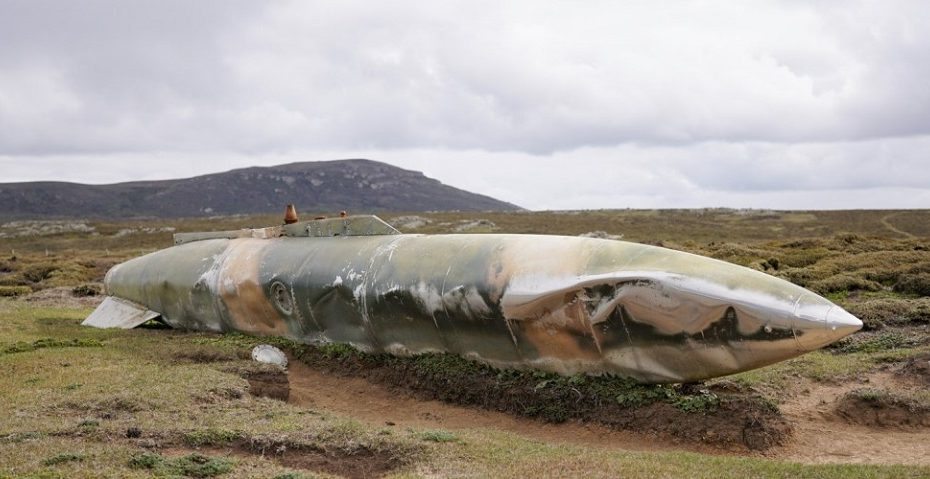 Everyone you meet in the Falklands has a war story. Nobby shared his memories with me as we drove over the hills that were once laced with landmines. But his story wasn’t unique – I’d hear many more while I toured the Falkland Islands. Not because I’d asked, but because the 1982 conflict is still heavy in the hearts and minds of those who lived through it. And it’s not just the people who have tales to tell. The land holds tales of its own; of fighter jets shot down so violently you can still find gnarled fragments of metal spread for miles, and of ships bombed at sea – their remains still languishing on the ocean floor.

The Falklands War was a swift but intense battle between the United Kingdom and Argentina over the sovereignty of the Falkland Islands. The battle started when Argentine forces invaded the islands on April 2nd, 1982 and lasted for 74 days until the Argentines surrendered on the 14th June. During this time over 900 military personnel lost their lives – the majority of which were Argentinians.

Following the war, the UK expanded its military presence on the islands, and built a military base called RAF Mount Pleasant. This base is home to over 1,000 (rotating) military personnel. Ongoing efforts are also in place to clear East Falkland of landmines (all danger areas are clearly signposted and cordoned off). Tony Smith – local war expert and tour guide – picked me up from my hotel in Stanley, the Malvina House Hotel, early in the morning. Our destination? San Carlos and Goose Green – two areas of East Falkland that played a key role in the conflict. As we drove towards the western shores of the island, Tony regaled more stories of the war in such detail it was easy to imagine the battles unfolding on the rocky hills in front of us.

Arriving at San Carlos, Tony showed me the landing site where the British troops alighted. This tiny beach, which was empty aside from a pair of steamer ducks waddling idly – was once an integral part of the war. It was where the troops started their overland journey – a journey up steep hillsides in freezing conditions – and into a war far from home.

We headed first to the Blue Beach Military Cemetery where 14 British Servicemen are buried. This number was originally much higher, but most bodies have since been returned to the UK at the request of their families. Their names remain as a reminder of the price these young men paid for the right of the Falkland Islands to remain a British territory. Leaving the cemetery, we headed back to San Carlos settlement where a small, inconspicuous looking museum greeted us. The museum is divided into two parts; the front room contains a fun, hands-on display about the early settlers and wildlife of the islands. The second is dedicated to the 1982 conflict and provides a more personal insight into the battles fought and the lives of the men involved. In one corner lay a poem from a widow to her late husband; her heartbroken words conveyed the real impact of the war – of broken families and mourning relatives.

From San Carlos we drove south towards the settlement of Goose Green, stopping at the Argentine cemetery en route. Sadly, many of the bodies buried here remain unidentified and simply bear the words “Soldado Argentino Solo Conocido Por Dios” which translates to ‘Argentine soldier known only to God’. Relatives of unidentified soldiers sometimes ‘adopt’ one of these graves in an attempt to find an outlet for their grief. We stop again briefly to take in the memorial to the casualties of the 59 Independent Commando Squadron, Royal Engineers, and the 2 Para Memorial closer to Darwin.

As we drive into Goose Green, it’s hard to imagine this tranquil spot being anything but. The local school swings sway gently in the breeze and the convenience store looks like it probably hasn’t changed much in 30 years. Almost unbelievably, Goose Green’s population of around 40 people makes it the third largest settlement in the entire Falkland Islands.

The town hall, where the locals were being kept hostage by Argentine troops, is still being used as a community centre today. On 28–29 May 1982 the battle of Goose Green took place, which was an important victory for the British side. The tour concluded at Darwin, where I continued to explore the area on foot.

In addition to visiting important sites on a battlefield tour, you can see remnants of the war and memorials to its victims scattered throughout the Falkland Islands. Here are some significant locations that I encountered during my visit:

The Historic Dockyard Museum doesn’t have any physical artefacts from the war, but it’s a fantastic place to hear the stories of the locals who lived through it. An audio-visual gallery plays a 13-minute video about the war and the effect it had on the Falkland Islanders – many of who were children at the time.

I visited Pebble Island for the wildlife, but the remnants of the war also left a big impression. During a tour with Riki – himself a young boy during the war – we visited the remains of two Argentine Daggers lying undisturbed on the ground.

You can also visit a memorial to the HMS Coventry which sunk offshore after being bombed by Argentine jets, and another for the 5 Argentine airmen whose Learjet crashed after it was hit by missile fire from HMS Exeter. On a walk along the waterfront in Stanley, you’ll see war memorials from both the WW1 and the 1982 conflict. Large cannons stand pointing towards the harbour, poised as if they’re ready to go into battle at any moment. And a large Falkland Island War memorial pays tribute to the 252 British military personnel and three Falklands civilians who died.

I came to the Falkland Islands in search of wildlife and walking adventures, but the islands’ tumultuous past has left an undeniable imprint on my memories. The morning after my tour, the most spectacular looking sunrise spread out over Darwin. The landscape looked so peaceful and serene, it was hard to imagine the bloody battles that once took place in that very spot. I wondered to myself if the soldiers here 35 years ago woke to the same sunrise before going into battle.