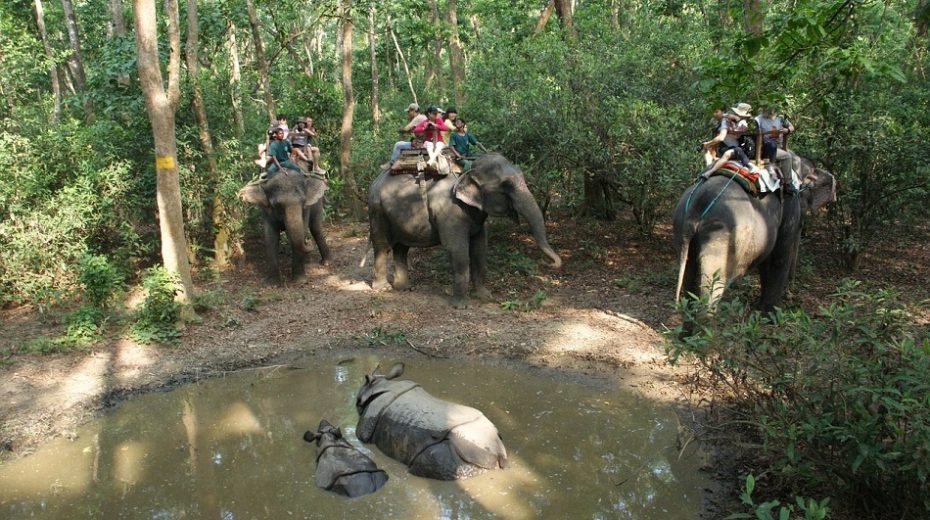 The mahout prodded Sundar Kali, a stunning greyish-brown pachyderm to offer her muscular trunk, so I could climb up to her bareback. I wasn’t nervous with the intimacy but climbing any animal is not a palatable source of enjoyment for me. I did want to walk along the graceful elephant to the Rapti River and give her a good scrub. She ambled in front of me, making the soft silted banks sink with every step, giving way to water where her feet had been. She found her usual spot and lay on her side, only half her face submerged in water. For me, it was still knee-deep and terribly cold for a warm February afternoon. I inched closer, gauging if she was ready for a good hearty scratch on her forehead and put my full weight to the effort. I got an ample spout of faux shower in return. Forty minutes of splashing the mammoth wall of grey, which must have felt like only a sprinkle for her, left me with an indelible memory of Chitwan. She strode back to the bank when we were completely doused in water and waited to be rewarded with a sandwich of hay and rice. Watching Sundar Kali unwrap the complicated bundle and pick only the rice was a sight to be seen. After a snack of 20 odd hay sandwiches she made quick eye contact through her long eyelashes and strolled back with hips swaying in a rhythm. While spending time with Sundarkali, Barahi Jungle Lodge’s one of the four elephants, was a definitive highlight, there are other memories that are going to be wedged in my mind for a long time.

The mist hangs till late even in February, thanks to the lower degrees in the mornings and the Rapti River that clutches onto the sides of the forest near the Megauli village. Since we were staying right by the edge of the forest along the Rapti, it was only a boat ride away to cross over and hit the dense riverine forest. Chitwan National Park lies at the foothills of the Himalayas in Nepal and is a UNESCO heritage site.

Known for its robust population of the single-horned Asiatic rhinoceros, a tryst with them in inevitable. We glided on the shallow Rapti one morning on a boat, looking for a good spot to anchor and hop over to the forest. A thick grey veil of mist hung over the entire river, making visibility a challenge; we could only see a few feet ahead of the boat. A few minutes passed and the sun struggled to tear through the grey sheet. Just then, we heard some movement ahead and a dark grey shadow appeared. It was a lone rhino, chomping on the river weeds. As we got closer, he nervously looked our way, and made a run for cover. Weeds hanging from the mouth, it splashed through the river with shockingly great speed. What a sight to witness an almost 1000 kg animal, dash through the thicket. Walking through the near opaque green jungle made largely of saal, rhino apple and silk cotton trees, hopping over fallen logs and keeping our eyes peeled for birds, insects and rhinos was thrilling. Not many forests allow visitors on foot, so this was exciting. Trailing our naturalist, Saket, we expressed our amazement only in hushed ‘oohs’ and ‘aahs’. Dry leaves crackled louder in the silence of the jungle. Legging through the forest has ample rewards; the high octave sounds of the birds, finding out the complexity of the insect world and being present to a unique environment. Red beaks and bright yellow plumage pierced the dark greens after every step. We also came close enough to a mother-kid rhino duo feeding on the tall grass of the forest. A peacock struts about in the forest The jeep trails in the jungle

The fatigue of legging it for five hours in the forest was alleviated that evening with a dash of luxury. We were in for a surprise when we were made to climb into three different boats and reached the confluence of two main river channels; Rapti and Narayani. The sun was sinking slowly in the horizon, turning from a blurred golden ball to a well-defined sharp orange. With wine glasses in hand, we watched the rivers merge in front of a sandy bank. Accompanying us were stories of the jungle and the sound of Brahmi ducks, which have another month before they fly over the mighty Himalayas to Siberia. The confluence of Rapti and Narayani Rivers The sun sets over the Chitwan National park

Getting there: Fly to the capital, Kathmandu, and then take a connecting flight to Bharatpur, at the edge of Chitwan National Park. Ask the lodge you’re staying at to arrange for a pick up at the airport. Buses are also available from different nodes of Nepal.